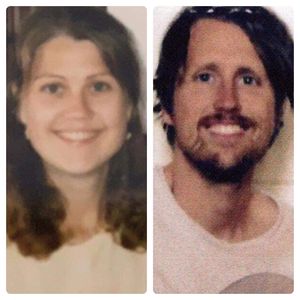 A question to adoptees/parents in reunion. Did you have an image or picture of what your parent/child was like and did it match with the reality of them in reunion?

I think throughout my life my mother has been too abstract an idea to really comprehend like a food you’ve never tasted or a colour never before seen. Other times she has taken form in various guises and then faded back again to a ghostly apparition.

When I was about 6 or 7 my cousin from the US was visiting and apparently I used to sit and watch her make daisy chains in the garden. She was blonde with blue eyes and I guess I thought maybe my mother looked like her seeing as I too had blonde hair and blue eyes unlike my dark haired and eyed adoptive family. So that was my image of my mother for a while, a 12 year old pigtailed girl making daisy chains in the garden!

Then the idea of her lived on in famous people, maybe my natural parents were John Lennon and Bridgette Bardot and I had to be kept out of the limelight so they had me adopted. As crazy as it sounds I seriously considered this and other scenarios!

When I was older and had left home I was actually told that my mother was a professional horse rider and didn’t want an unplanned baby to get in the way of her career. That gave me an image to work with and maybe that was enough for me. I was intrigued but kept myself emotionally distant because she never wanted me anyway and she was a stranger. I took that part surprisingly well but I had been told before that I wasn’t wanted by my original family but I was by my adoptive parents, a familiar story heard by adoptees I’m sure. By then I had built up such a wall that it didn’t really phase me.

My adoptive parents had both died and I finally talked myself into a now or never search. I had already built in my mind an image of her and how the reunion would go. I saw my mother as an emotionally distant lady though she was pleasant and polite. She never married and had no more children after me. She lived in a detached cottage, she loved animals, especially cats and still worked with her beloved horses. Her life had been her passion and career.
She would be happy to meet me and find out more about me and agree to have me round for tea and a chat and maybe she would show me some photos of her life, her career. She would talk fondly of my father whom she had a whirlwind romance with. She had no idea of where he lived and he didn’t know about me but she would give me the one photo of him that she still had in her possession.
When it was time to leave she would say it was nice to have met me but the past was best left in the past and she wouldn’t want to see me again and please respect her wishes. I would say that was fine, I’m glad I met her and was happy I could put the not knowing behind me.
I would be fine with it, I had never really wanted children myself because my music which was my passion was the most important thing in my life so I understood why she had given me up.

And then I actually found her and I couldn’t have been more wrong!
Firstly I wasn’t quite told the truth, though she was a keen horse rider she didn’t give me up for a career. She was 16 and given no support and no choice by her father. She didn’t have a career in horses, in fact she married young and had another 3 children after me. I was so happy that she had a family and had lived a life and yet so jealous and hurt that I had not been part of it. I wasn’t expecting to feel hurt, I didn’t think that was possible, I had prepared myself for being unwanted so how could being wanted hurt?
The thing that I had never considered was that she didn’t want me to be adopted and she had suffered because of it. That shocked me and it was hard to know she had felt pain. It was easier for me to believe that she was fine with the decision, I wasn’t expecting that at all.
She also put my in touch with my father who I now have a relationship with too, I wasn’t expecting that!
She wanted to get to know me and wanted me in her life, she wanted me to be part of her family who she said was my family too. I wasn’t expecting that either!

I started the reunion as polite and guarded as I always am but I soon broke down, the walls that kept me safe and somewhat numb all my life began crumbling around me. I felt emotions I had never felt before, both incredible and equal amounts of love and pain. The need to know her and bond with her and the need to grieve for the loss of her. It was almost too much and I wasn’t ready for it but we chatted every day and helped each through the rollercoaster ride of emotions we were both faced with.
She was loving where I thought she would be distant, emotional where I thought she would be cold. I still feel that love and pain though the pain isn’t quite as severe, maybe I still grieve because of how well we have begun to bond and feel a connection and as wonderful as it is to have that now I wished to have experienced that as a child.
We’ve been in reunion for nearly a year now, we have chatted every day online and have met three times, soon to be four. I for the first time saw my own eyes staring back at me, that was amazing like seeing land for the first time in a life of drifting an seemingly endless ocean.
I’m actually moving to live in the same town as her and though I’ve always been worried about intruding into peoples lives, I think she’s as excited as I am!