What I want adoptive parents to know 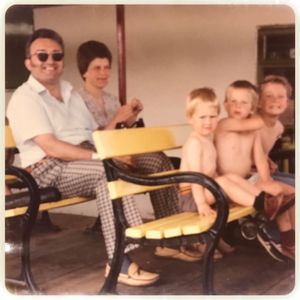 Recently I received a comment on a blog past of mine which accused me or at least the article and comments of throwing adoptive parents under the bus. I’m assuming they were an adoptive parent themselves and seem to have been either hurt or affected by adoptees wishing to find or at least know about their genetic history. I want to address that comment, explain about my situation and hopefully reach out to some adoptive parents who might believe that adoptees wishing to contact their birth families is an insult and a sign of ungratefulness to them.

Firstly let’s clarify some of the language we are using here as I know it can be a difficult and triggering subject for some but we need to make distinctions so we understand who is who. After all, what is the meaning of language but to create some kind of order and meaning from chaos and adoption is chaos for a child as they are thrust from the safety of the known to the uncertainty of the unknown. Some would claim that for me to call the parents who raised me my “adoptive parents” is to somehow spite them, but really they are missing the point. When I grew up they were the only parents I knew so they were just that, my parents but now I have found my birth family I have to describe them as my adoptive parents to clear up confusion when talking about adoption. If I’m talking about them to someone who knew them then I would simply call them my parents, it’s all about context. We don’t ignore facts or at least we shouldn’t just because it might not be what we wish for. Birth parents don’t want to be reduced to being termed as merely a baby providing machine and I understand that but you gave birth to your child and it’s a term that most people know and understand.

I guess being told that my article was throwing adoptive parents under the bus was like being accused of betrayal. Firstly the article in question was about my reunion with my birth family and primarily my birth mother. The reason I didn’t talk about my adoptive parents was because unfortunately they have both died and so are not a part of my reunion. I understand that for some they are an active part of the reunion process and it warms my heart when I hear stories of how adoptive parents have helped and supported their child in the search for their birth family. Anyway please tell me how I’ve betrayed my adoptive parents by searching for my birth family? It is purely in our nature to want to know our origins and to experience genetic connections with our blood relatives. So I guess your feelings were hurt? Well I don’t really care, I care more for adoptees who feel like they have their voice shut down when they speak about their experiences.

My own adoptive father used to talk about his own brother and say that blood was thicker than water meaning he got how important his own genetic connection to to him. It’s a strange thing to say to your adopted son! He also said if I wanted to find my birth family he would disown me, I don’t know whether he actually would have done but the threat was certainly there so the connection we had was certainly precarious. The relationship I shared with my adoptive mother was much better, she was much more accepting of me as an individual who was quite different to her while my father always seemed annoyed that I wasn’t just like him and he really didn’t get me at all. I do hope she wouldn’t have felt betrayed by my wish to find my birth family, I saw first hand the connection and instant bond she shared with her parents and siblings, it was like they were an instant tribe and unconsciously rejoiced in all the subtle genetic mirroring that surrounded them when together and it was like her soul lit up when she was with them. I wished I’d have been able to talk about my adoption more with her even though I think she’d have found it difficult.

Adoptee and birth parent trauma is definitely real but we should also consider adoptive parent trauma. First there is the pain of not being able to conceive, couples generally get together with the hope that they will start a family and have their own children. My adoptive parents were exactly that couple and I know in my heart that they would have desperately wanted their own children but unfortunately for them they couldn’t. I feel my father later blamed my mother for this and after she died he said to me that she was unable to have children so we got you instead. So random commenter who accused adoptees of throwing their parents under the bus… if my adoptive parents had been able to have children they would not have adopted. Is that throwing me under the bus? Well no, it’s just circumstances and I’d have gone to a different family and never had known them but still I’d have had a desire to search for my birth family. Do you get it yet? Second is maybe the realisation that your child is not your flesh and blood and has a completely different genetic history to you. They may look and act completely different to you because nature is stronger than you’d perhaps like to think. I imagine that’s hard to get your head around if you adopted to replace the children you couldn’t conceive, it’s certainly worth considering.

A tale of two lives

When you enter into the world of adoption either as a birth parent or adoptive parent you are splitting the child into two. I know you may have been sold the baby as a blank slate theory but this is so far from the truth it really isn’t funny. An unadopted child has one set of parents who gave birth to that child and share genetic history with all the sense of belonging and contentment that can bring. They also raised them and created shared experiences with them like nurturing them as babies, seeing them start school, family holidays and the list goes on. An adopted child has two sets of parents that share these roles. Both the adoptive parents and birth parents need to come to terms with the fact that they didn’t provide both and to wish for that is futile once you decide to relinquish/adopt a child and the circumstances and reasons why do not affect this.

Both can be true

The point of this article is to illustrate that both things can be true at the same time. I can be happy and thankful that I was adopted into a safe and loving home, love my adoptive parents and yet hurt and grieve for the things I lost because I was adopted. To deny that to an adopted child is like declaring ownership over them. Imagine if I came along and killed all of your family and friends, you would be distraught of course. In time you may make new connections and maybe even fall in love and marry. Is to mourn still for your lost family and friends to spite the new people in your life? No-one of course would ever think that and yet that is exactly how adoptees are often made to feel.

I imagine mostly adoptive parents don’t bring up difficult conversations about adoption because they think well my child is fine or just having considered it. You may feel like it would hurt your feelings if you considered the fact that adopting a child could cause trauma to them. It really doesn’t matter the circumstances, to a baby that just wants their birth mother, they are hurting despite your best efforts. A child to lose either birth parent is a tragedy no matter the reasons why, you are second choice parents to an adopted baby and they have suffered a great loss. The child can grow to love and respect you like I did with my parents but please don’t deny them the right to know their birth family. My adoptive parents avoided the issue with me, I guess they felt that there was no point in bringing it up if I didn’t express a wish to want to find them. The extra cautious and vigilant child inside of me, the one terrified of being rejected again was just looking for ways of not upsetting anyone and this meant putting my feelings last sometimes. I didn’t talk about my adoption because I didn’t feel like I could and that is something I hope you can take away from this article if you have an adopted child. Always love and support your child, put them first, address their trauma and be the one to initiate difficult conversations about the loss of their birth family.

Get a FREE album here